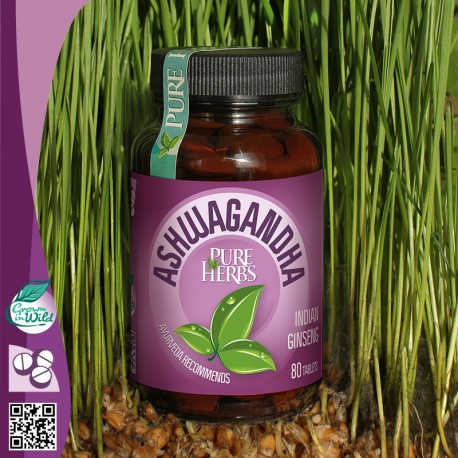 ASHWAGANDA
(combination of herbs and extracts in tablets)

ASHVAGANDA - a unique Ayurvedic product made according to the technology and recipe developed by the Vedic Institute of Healthcare and Research, in accordance with the requirements of the Ayurvedic Pharmacopoeia. In the literature, ASHVAGANDA is often called Indian ginseng and winter cherry.
The formula is based on a combination of the unique pharmacological properties of herbal powder and root extract. In order to ensure a controlled dose and maximum effect, as well as to achieve the expected stable result, the formula uses plant extracts and chopped parts, providing the required amount and composition of substances.

In the technological process, the company, whenever possible, uses only wild-grown raw materials, which allows to ensure the highest requirements for the quality and performance of the final product. The recipe does not contain hidden chemically synthesized fillers and ingredients.

Exposure: Increases the resistance of the human immune system to the aggressive effects of the external environment. As an adjunct to hypothyroidism, infertility, menopause, dementia and other neurodegenerative diseases. ASHWAGANDA is known as an adaptogen and aphrodisiac. It is popular with athletes as a means of overcoming exercise and promoting muscle gain.

Deva:
2 tablets - once to twice a day on an empty stomach, drinking warm water or milk.

Suitable for vegetarians and vegans. Do not take high doses of ASHWAGANDHA during pregnancy. There are no known side effects. Following the dosing recommendations, Ayurvedic preparations are completely safe and effective.

* Note: Do not exceed the prescribed recommended dose. It is not a substitute for food. Keep out of reach of children, protect from direct sunlight. Store at room temperature, normal humidity. The expiry date refers to the intact packaging subject to storage conditions.

Although historically this plant was used as a medicinal plant in India, this plant grew and was traditionally used as a regenerating plant in the ancient Mediterranean countries, Palestine, Asia and now of the Arab world, as well as in Africa.

In historical Ayurvedic texts, it was believed that the root gives horsepower and sexual masculinity. Some African tribes have also used this plant as an aphrodisiac. But despite its name, which refers to the smell of a horse, ancient cultures knew that Ashwagandha offered many more benefits than what is called a horse's physical strength and masculinity. In fact, it would be more difficult to name areas where ashwaganda has no therapeutic benefit according to Ayurvedic evidence than those where.
Here are some of the known examples of the historical use of ashwaganda in Ayurveda, Junani and traditional medicine in the Middle East, which over the centuries has proven its effectiveness in treating and preventing such conditions and diseases as:

Ashvaganda continues to be used for medicinal purposes throughout Africa and India. Ayurvedic practitioners in India use this plant to treat various conditions, including its use as a mild, diuretic and tonic for the liver. In Cape Verde, the leaves are prescribed as a tonic, cleanser and anti-gonorrhea. In Ethiopia, asquaganda is used to treat epilepsy and cough, and in Madagascar to treat asthma. In South Africa it is used to improve female fertility, in Somalia the roots are given to children as a remedy for nightmares.

* Note. The food supplement should not be used as a food substitute. Do not exceed the recommended dose.

Keep out of reach of children.

www.pureherbs.lv exposure:
Improves the functioning of the immune system, has anti-inflammatory, anti-gerontological effects, antioxidant, is used in case of diabetes, depression, dementia, pathological anxiety, as well as in case of increased physical activity. Ashwagandhu is used for heart disease, arthritis, asthma, general fatigue and weakness, as well as for postoperative recovery, loss of libido, hypothyroidism, infertility, menopause, neurodegenerative diseases, obesity, venereal diseases, skin wounds and ulcers. The substances in Ashwagandha slow down the growth of some types of cancer cells. let's take a closer look at some aspects of the application of Ashwagandha ...

immune system:
the active substances in the plant strengthen the existing cells of the body and help the formation of new cells, which destroy bacteria and other harmful elements.
Their action also ensures that oxygenated blood flows smoothly through the body, strengthening it and making the body able to resist the fatigue and weakness often associated with anemia.

anti-gerontological effects:
Ashwagandha, often referred to as Indian ginseng, is well known for its anti-aging properties. It helps to moisturize and keep the cells as healthy as possible by filling the body with good cells and reducing cell degeneration.

athletic effect:
Ashwagandha is also known for its ability to maintain testosterone levels in the body. This is one of the reasons why many athletes prefer to use this plant. Ashwagandha increases muscle strength and improves coordination.

aphrodisiac:
The special popularity of this Indian scrub has earned as a means of enhancing sexual activity and increasing the ability to conceive and conceive.

brain diseases:
blocks the action of calcium around neurons, contains tryptophan, helps regulate cortisol levels. Cancer: Animal and human studies have shown that the substances in Ashwagandha slow down the growth of some types of cancer cells, including:
lung, mammary gland, colon, pancreatic cancer (blocks the action of Hps90), melanoma, prostate, sarcoma, leukemia.

how does it work:

Use in any thyroid-related disease under close supervision by an endocrinologist. Ashwagandhu should not be used during pregnancy - it can potentially induce abortion.