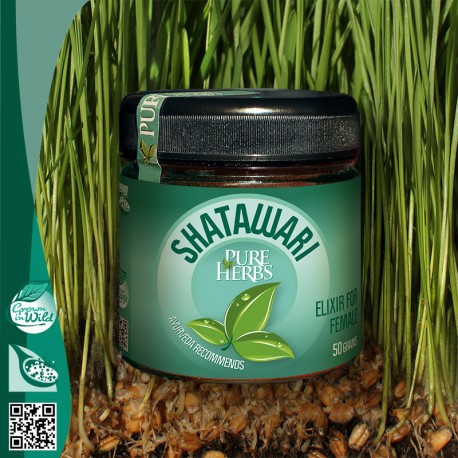 SHATAWARI
(combination of herbs in capsules)

Shatavari is the main natural rejuvenating elixir for women in Ayurveda, a plant that can give strength to the reproductive organs and promote the normalization of the immune and hormonal systems. It has emollient effects, regulates blood loss during menstruation, diuretic, rejuvenating, tonic, sedative, antispasmodic and antibacterial effects. Strongly increases sexual energy. Shatavari activates the ovaries, increasing their ability to fertilize. Normalizes the menstrual cycle in women.

Dosage:
1/2-1 tea spoon of power, two times daily on an empty stomach with warm milk or water. It is desirable to add a little melted butter to the milk.

Suitable for vegetarians and vegans. At high doses, there may be problems with the gastrointestinal tract. There are no known side effects. Ayurvedic preparations are completely safe and effective in terms of dosing recommendations.

Scientific studies show that women who regularly use this plant have an increase in the number of mammary glands and an increase in milk secretion, which is associated with increased synthesis of prolactin and somatotropin.

The rich content of bioflavonoids and natural antibiotics in the plant cleanses the blood and mucous membranes of a woman's genitals.

Because the plant contains many analogues of female sex hormones, it is used in menopausal women as well as those who have had a hysterectomy.

May have anticancer effects.

Shatavari has a positive effect on the male reproductive system - it is used to treat impotence and inflammation of the genitals.

Shatavari is an effective emollient against atrophic hypoacid gastritis, stomach ulcers, dry skin and even herpes.

Shatavari quenches thirst and promotes fluid retention in the body, which is justified in the complex treatment of enterocolitis.

Effective against bleeding and hemorrhoids.